We have received the following message from Heidi Pruess, who is the Program Manager for Larimer County’s Climate Smart Initiative. They have established a task force to formulate processes and programs, and are organizing a series of workshops to get community input on just what sort of climate projects the County should take on. A questionaire is included in the message. Note: from the introductory page of that questionaire, advance using the Back/Next/Arrow to advance the pages:

Please help us Spread the Word!

Larimer County has launched the Climate Smart Initiative and we want your feedback!

This initiative is in the information gathering and community feedback phase.  This means that we want your feedback as well as feedback from your friends and family.

This questionnaire aims to introduce the initiative to the community, to understand where we all stand on climate, and to recruit participants for workshops in February 2022. Community feedback will inform the development of the County’s first Climate Smart Plan.

Take a look at our new website here and please take this short, 10-minute questionnaire. Please help us in spreading the word about this important initiative; forward any email and social media notices to your networks.

On Tuesday, September 28, Doug Henderson delivered these remarks in the Administrative Matters meeting of the Larimer Board of County Commissioners. Tim Gosar, Gayla Martinez, Cory Caroll, and Jonathan Singer (LOGIC’s new executive director) also made comments to the Board:

We presented evidence about such emissions from a Prospect Energy
facility northeast of Fort Collins, including imaging of the emissions
taken by Earthworks in January and March 2021. A local resident also
told of his experience, health impacts, and harm suffered for years from
toxic emissions from this facility.

After the January investigation by Earthworks, a complaint was submitted
to the state, and Prospect subsequently said it had stopped the leaks
and emissions.

The next investigation in March showed that the facility was still
leaking, and another complaint was submitted to the state.

Prospect then actually made some repairs, and the leaks and emissions
stopped. At least temporarily.

But before long, local residents again were suffering from emissions
from this facility. So in early September, Earthworks investigated
again. Here is video from that investigation – which shows the facility
was leaking again
https://www.youtube.com/watch?v=SAWHJ8CzY5E

(A copy of the letter from CDPHE to Prospect Energy is attached.)

Only 2 months after CDPHE’s warning letter to Prospect, Earthworks
documented the January 2021 violation. Then came more documented
violations – in March and again earlier this month.

A few weeks ago, Earthworks also documented illegal emissions from
another Prospect facility in the Hearthfire neighborhood
https://www.youtube.com/watch?v=gC1anPkau_E

Unfortunately these emissions happen at O&G sites all the time. This is
oil & gas business as usual, how the industry has operated for decades.

It is time to protect public health and the environment from these
harmful and illegal emissions.

It is also time to hold Prospect Energy fully accountable for its record
as a repeat violator.

Thank you for your attention to this.

Doug, along with our colleagues in Earthworks, has also been maintaining communication with Cassie Archuleta, Air Quality Program Manager for the City of Fort Collins, bringing attention to these sites Northeast of Fort Collins. Particular attention has been paid to one located near the Hearthfire neighborhood.

A version of the following was posted to our community and allies on September 7. Do fee free to comment. . . 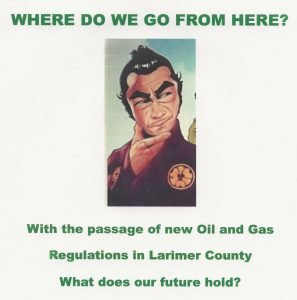 The Larimer Board of County Commissioners passed an amended set of regulations for oil and gas development in a marathon session on the night of Thursday, July 29th.

For over two years, the Larimer Alliance has worked to inform our members and community, rallying their support to key hearings at both the County and State level for improved regulation of this environmentally dangerous industry. The support and input of our membership and many allied groups have been key in securing improved regulations. . . which still leave much to be desired in terms of comprehensive protection.

The question is: Where do we go from here?

While it is clear the County Commissioners have paid attention to some of our concerns, there is much that needs to be done to ensure the regulations as they exist are enacted effectively, and to continue advocating for improvements to the regulation of oil and gas projects in Larimer County.

in implementing your ideas going forward!

An ad hoc gathering of some of our steering committee has identified a few areas of potential activity, which we have listed below. But we wouldn’t be here without your interest and energy. . . and we need  your continued interest and energy to define and pursue the way forward!

These are only a few potential initiatives the Larimer Alliance

could pursue going forward from here.

What do YOU think should be the vital point of focus?

As ever, we rely on the support and input

of our members and community!

For all you do, we thank you!

Check on relevant events on our Calendar Page!

[Author’s Note: I submitted the following comments to the Board of County Commissioners on July 28, 2021 because I did not get the opportunity to speak in the Zoom meeting on Monday night, July 26, 2021. Since the topic of this final meeting was about the financial ability of operators to conduct their business, that was my focus.]

Good evening commissioners, county staff, and the public in attendance:

Thank you for allowing public testimony at tonight’s historic meeting. I and my colleagues in the Larimer Alliance deeply appreciate this opportunity to make our voices heard.

Climate change is barreling down on us, and anybody who is in denial of this reality is either in denial of global scientific evidence or is seriously in need of a mental health checkup. I am sure the county government is on the side of science, factual evidence and the law.

Since this evening’s meeting is primarily about fiscal responsibility of how oil and gas operators conduct their business, I will frame my comments around the long term outlook for how well local operators will be able to continue to operate. I am only a common layperson who reads the news, but having been an economics instructor at Front Range Community College since 2009, I have read deeply into these economic issues.

I would ask the commissioners to be especially wary any operators seeking to drill new wells in the county. The primary economic indicator to which these operators will frantically point is the international price of oil; typically the NY Mercantile Exchange price, which today was $72/bbl. But that price is as unstable as a wind vane: it will change with the winds of change in international economics. Last September, that price was at $36/bbl. The current price is based on recent announcements by OPEC+, which could change tomorrow.

Fundamentally, the long term price of oil is stacked against drilling of any new wells because the forecast for the long term need of oil and gas is, shall we say….unfavorable.

The use of EV’s, or electric vehicles, is ramping up, and every major car manufacturer in the world, including GM, has announced a target date by when they will cease production of fossil fuel powered vehicles, with dates varying from 2030 to 2050, most by 2035. The state of Colorado is already investing significant state resources in the encouragement of EV’s. We can certainly expect the adoption of EVs to grow dramatically in the next decade.

The date for the end of fossil fuel powered vehicles is just a mere decade and a half away. Although this is a high level macroeconomic projection, it is an undeniable global economic force that the commissioners should consider, for it will undoubtedly have dramatic implications for current investment decisions in the county.

Other macroeconomic factors that could affect investment decisions are national energy policy, such as a possible future carbon tax, which would dramatically impact any local operators’s financial projections.

I have not even begun to address the long term health impacts, which is a whole other argument against allowing any further investment in oil and gas drilling in the county.

Also, all the arguments by private property owners about “takings” are invalid, which SB-181 specifically addressed. These people need to read the law, which was arrived at after years of strenuous democratic activity — and also realize that the national and global imperatives about global climate change far outweighs any of their claims about damage to their private property and income.

Based on this evidence, I think the county should be steering its investments away from fossil fuels and towards renewable energy-based industries.